I will always be an artist who expresses what is true in my heart. 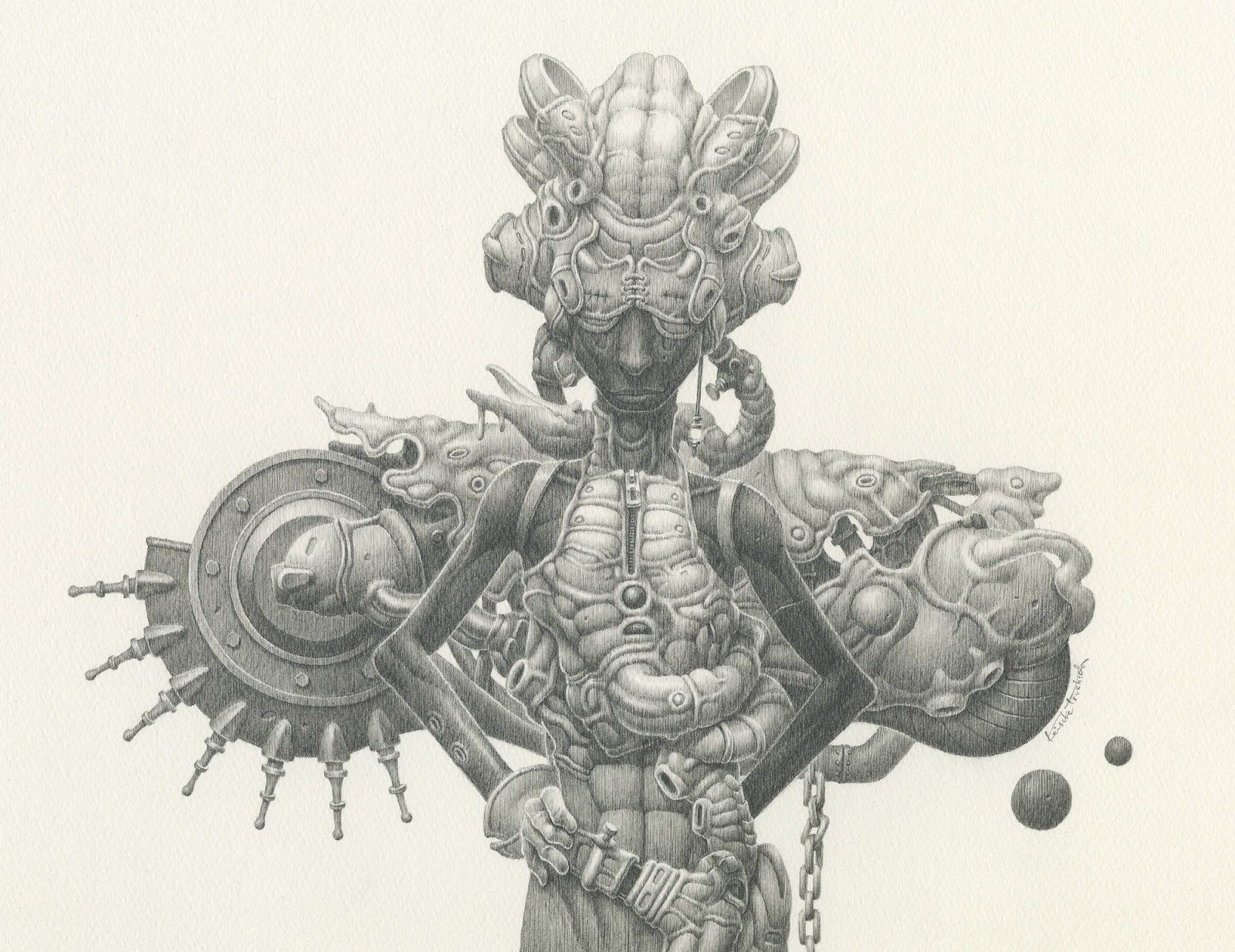 A challenge by Keisuke Tsuchida

On paper, what sets emerging artist Keisuke Tsuchida apart from his contemporaries is his approach to art: a penchant for delicate, vertical lines paired with a full palette of 22 grades of graphite. And while realism may be in vogue when it comes to pencil art, Mr. Tsuchida doesn’t shy away from his fascination with the fantastical. His works are intended to evoke a personal journey of pure emotions from joy and happiness to compassion, and even sorrow.

In this interview, we talk with Mr. Tsuchida about the origins of his imagination, his diverging path from mainstream realism, and the spirit of strength that lays the foundation of his artistic style. (This interview has been translated and lightly edited for length and clarity.)

Creating Something from Nothing

That was the moment I knew I wanted to become an artist like him as it was my long-lost childhood dream.

How did you discover yourself as an artist?

I was always interested in the process of creating something from nothing, and drawing was a natural way to realize that interest.

In my childhood, video games became quite popular, and I was particularly drawn to role-playing games and their stories. I also started reading fantasy novels that the games took inspiration from such as Tales from Earthsea, as well as novels like Ys that were based on popular games.

One story that I vividly remember is the Japanese graphic novel Akira, which I discovered at my school’s library. I couldn’t fully understand its complexity, which was the same for Tales from Earthsea, but that made it all the more mysterious and interesting — and I loved it. I think that feeling, the excitement of mystery and complexity within a story, lies at the core of my art. 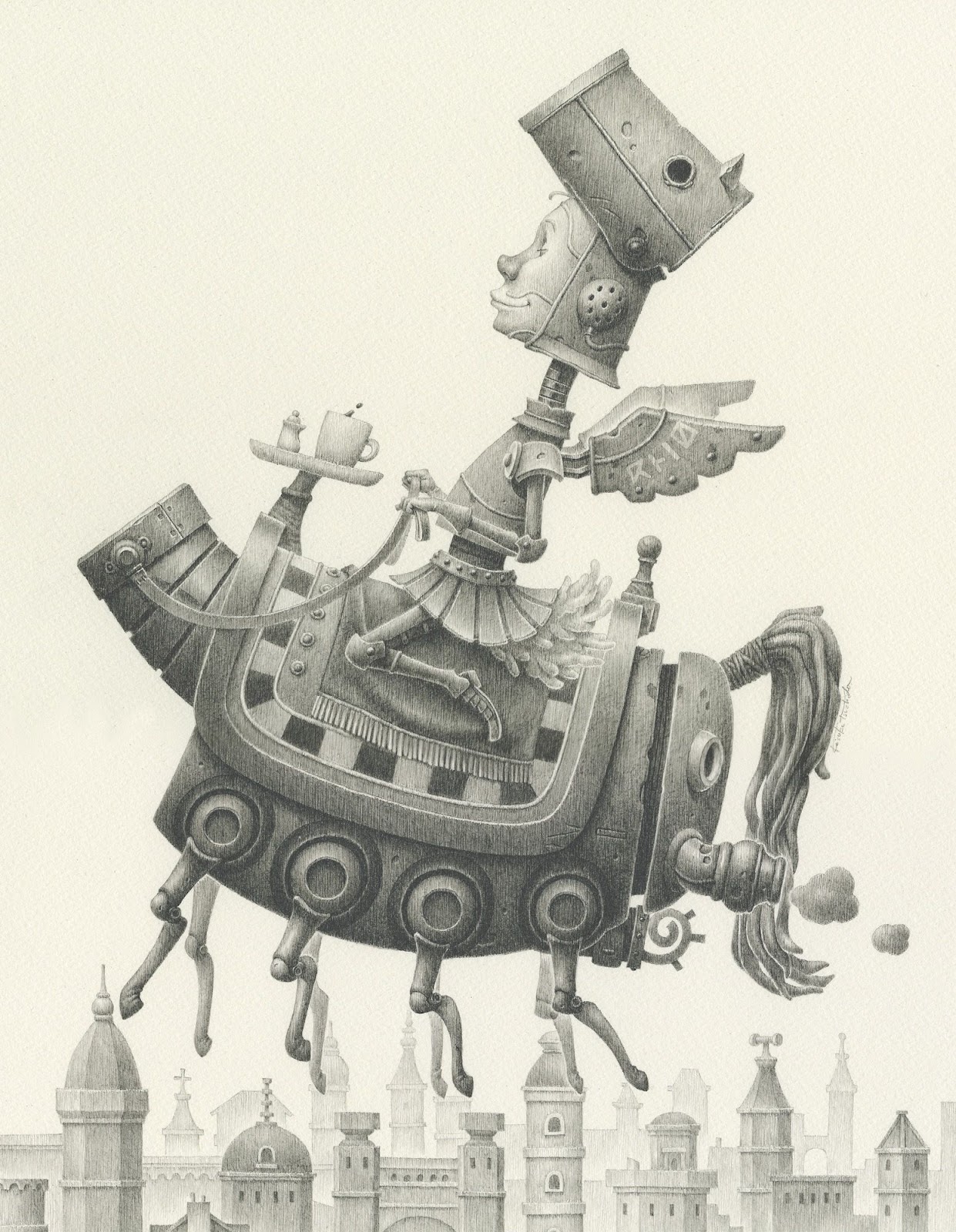 Walk of a pegasus by Keisuke Tsuchida

After graduating high school, I started working for a “normal” company, but I felt that something was off within myself and often found myself questioning my life. One day, I stumbled upon an exhibition of Alphonse Mucha’s works, and I was astonished by his sense of beauty and technique and the way he conveyed his ideas. That was the moment I knew I wanted to become an artist like him as it was my long-lost childhood dream. Eventually, I decided to quit the company and become a full-time artist.

Why did you choose pencil drawing as your medium?

After leaving the company, I studied at an art school. During my time there, I kept searching for my style and experimented with many approaches throughout my coursework. While trying many art forms and techniques, I realized I was too caught up in the concept of “art” and how I thought it should be. Everything felt wrong because I put too much focus on technique, so I decided to return to the simplest form of pencil and paper while also focusing on drawing subjects that came from my heart.

Which artists or artworks were most influential in your life?

That would be Alphonse Mucha and Norman Rockwell. Both artists developed a simple style with a strong message at the core. I aim to be an artist like them one day.

…I try to express a depth of emotions in my art. You may find kindness and joy within the pensive faces of my pieces… 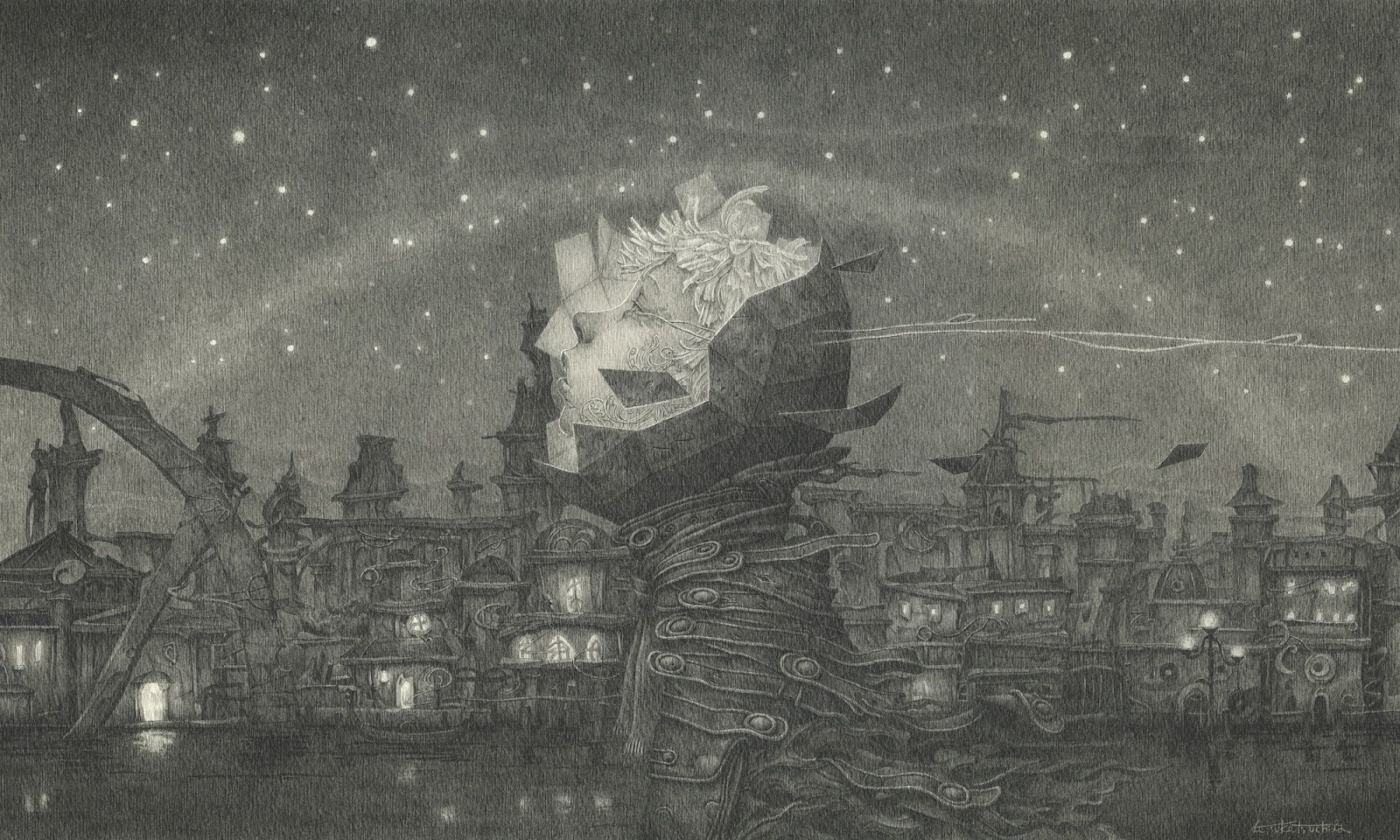 In the end of a day by Keisuke Tsuchida

While the realism of graphite pencil artists such as Susumu Kinoshita have become popular, your work depicting fantastical worlds and stories stands out. What do you aim to achieve through your unique style?

In any novel, the reader is left to freely imagine the face of the characters or scenery through the text — my work does the exact opposite. The viewer can imagine the story and emotion through the art.

Also, I want my work to help the viewer, however small that influence might be. I want to create art that doesn’t strongly assert a message, art that gives you some emotional support as if it’s a person standing silently by your side when you’re in grief, rather than giving unwanted lectures.

That’s why I try to express a depth of emotions in my art. You may find kindness and joy within the pensive faces of my pieces, because I believe that one of the sources of sadness comes from losing cherished memories. I want to draw a world with this depth; sad characters with kind hearts, or joyful scenes undercut with a whisper of loneliness and hardship.

What message do you wish to express in your art?

What I want to create is the spirit of things, but such a subject is shapeless. That is why drawing appeals to me, because it is one of the simplest methods of expression by excluding all unnecessary elements, leaving only light and shadow. Pencil art is about implying light by drawing the shadow. Simple art like mine can have a variety of interpretations. I prefer not to push my ideas and thoughts onto others but rather express the core idea of the subject, something we can all relate to at some core level.

Why did you choose to focus on developing your own style instead of following the recent trend of realism?

Realism has indeed become the mainstream of pencil art. The details and shadows depicted in this genre are quite amazing, but the idea of drawing subjects from the real world has never interested me. I prefer drawing from my imagination, an inspiration that comes from within. I think I am simply fond of the idea of creating something from nothing.

What can pencil art express better than any other medium?

Up close, you can actually see each line, and the artwork creates a different impression depending on the angle it’s viewed from. You can feel the artist’s passion and spirit through observing the artist’s touch.

I believe that pencil art is very special in the way that while the tools and materials are familiar to everyone, it has unlimited potential for expressing anything that you can imagine. I also like the idea of its simplicity. Like how the pencil used in childhood still has a function later in life.

Other than drawing, where do you find your inspiration?

Gaming, anime, movies, graphic novels, fantasy novels, and music. I prefer the culture of the ’80s and ’90s over today. I like pixelated video games more than smooth, high-resolution games, hand-drawn cel animation over CGI anime, cassette tapes with background noise. I like the warm feeling that these things from the past give me — a nostalgia that fuels my creativity. 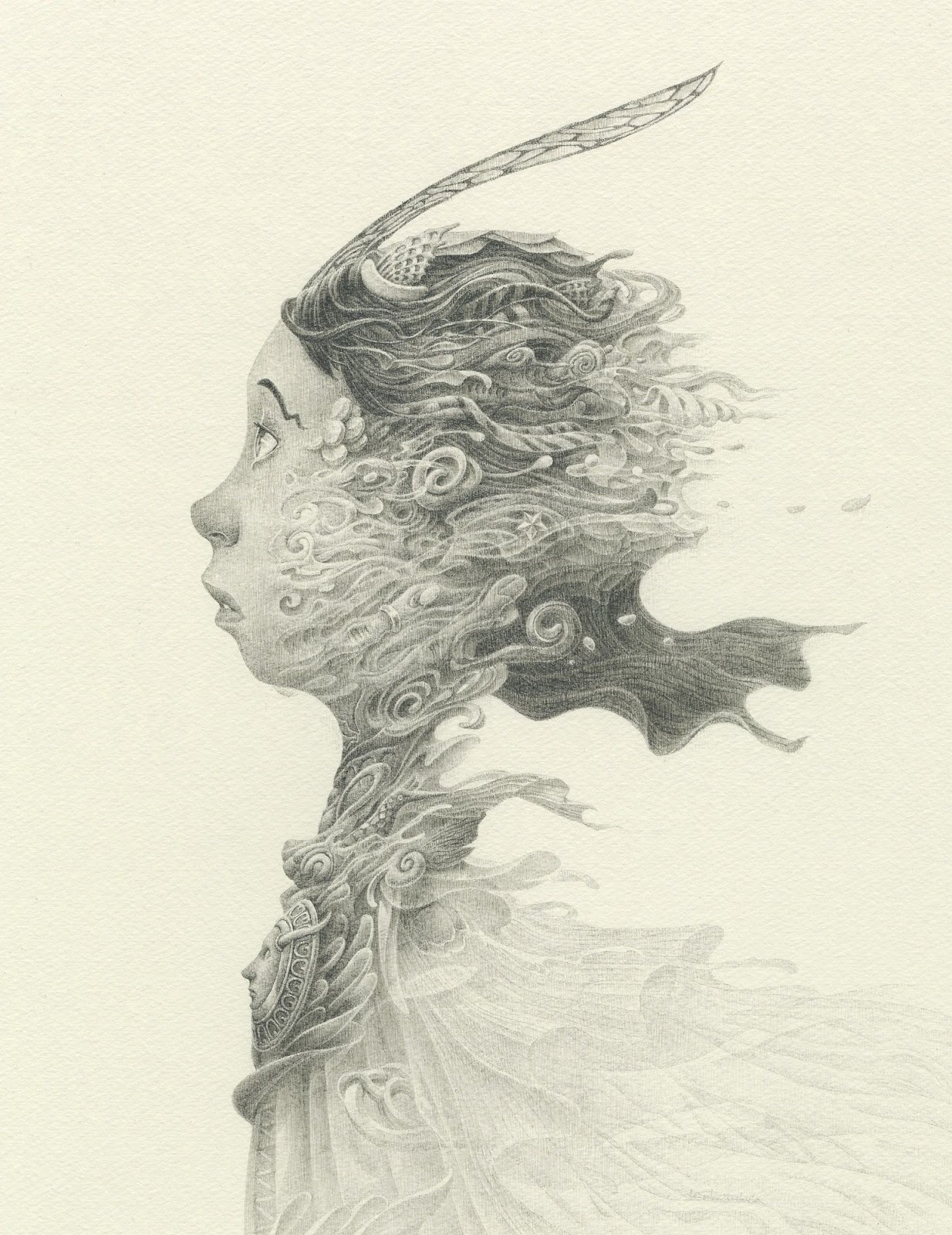 Breeze of otherworld by Keisuke Tsuchida

…spirit is the core of what I try to express through my art.

There seems to be a strong contrast in your art between the subject and the surrounding blank space. Is this a conscious decision?

For some of my work, I intentionally play with the dynamics between the details and the surrounding space, but there are times when the results are unintentional. When I consciously bring this design element into my work, it’s because I want to “draw” the emptiness; in other words, what I draw is there to highlight the empty space.

It seems like your style feels more down-to-earth and laid-back compared to some of your contemporaries. What feelings do you wish to evoke through your art?

Let me tell you about two people who strongly affected my art style.

In my school days, I had a friend who always smiled and never fought back no matter how mistreated he was by classmates. Interestingly, it was I who became furious when this happened. I respected my friend for having the strength to follow his own rules and avoid fighting, unlike others who would give in and join in bullying.

Another friend helped me a lot when I was neglected by my entire class who gave me the silent treatment. He was the only one who talked to me normally, and thanks to him, I found my way through that lonely time spent in school.

In these two friends, I saw true strength in their spirit, not strength brought by authority or by standing out. The same spirit is at the core of what I try to express through my art. 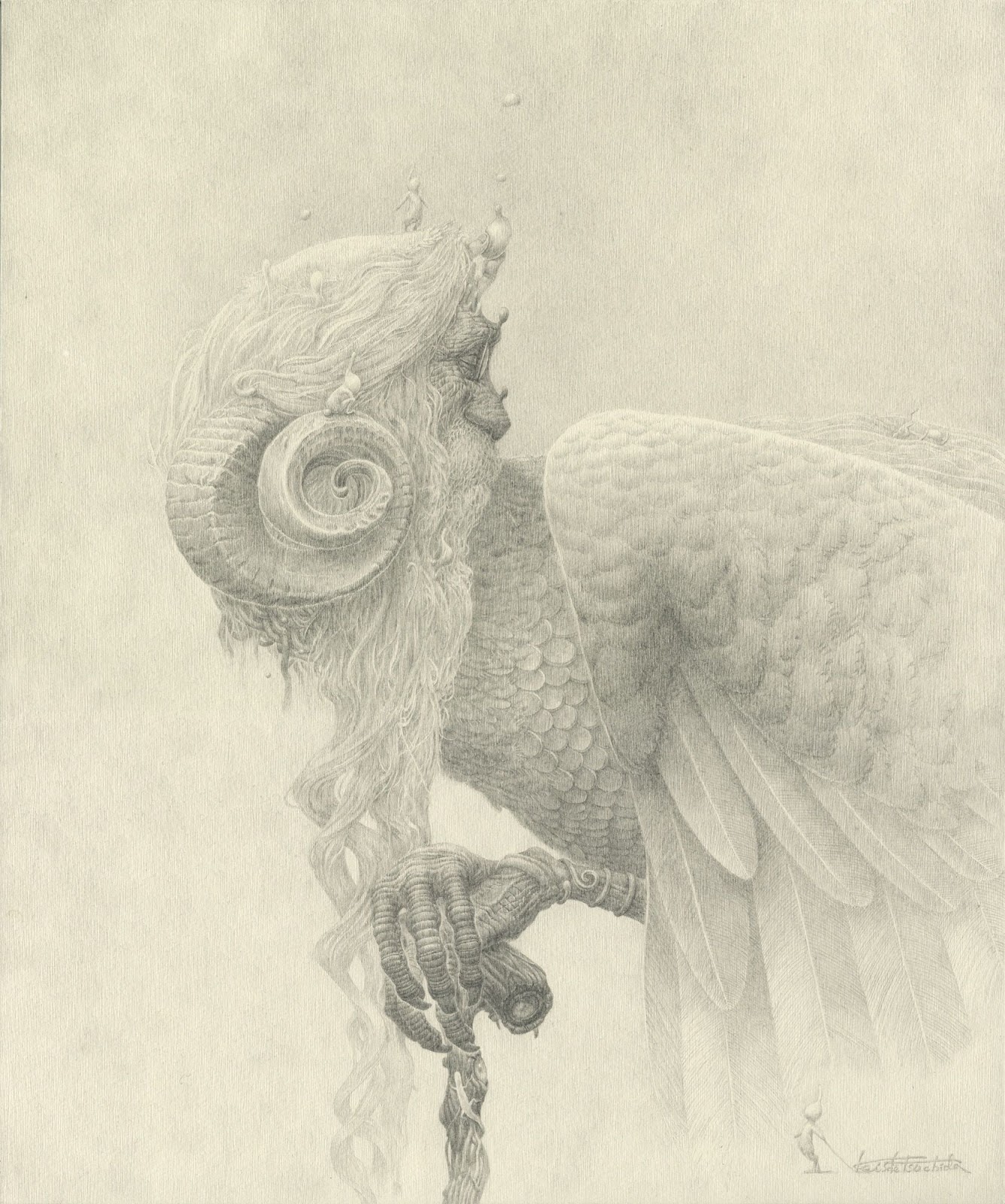 Woods of sleep by Keisuke Tsuchida

There was a time when I tried to create my idea of “sophisticated art” as I was caught up in the idea that art had to be refined. But my pursuit of that concept drove me far from what I wanted to express — the true strength of one’s spirit.

Occasionally, I take up a philosophical concept such as life and death as my subject matter. For example, when the devastating earthquake hit Japan in 2011, I drew as a memorial. But that kind of theme will never be my primary focus as it feels unnatural for me. I would like to draw emotions and thoughts from daily life. I will always be an artist who expresses what is true in my heart.

Where to Buy Pencil Art by Keisuke Tsuchida

We are proud to offer several of Keisuke Tsuchida’s pencil art pieces for purchase anywhere in the world. See more of his works as well as other contemporary artists from Japan on TRiCERA.