The artist’s point of view depicts a futuristic image of Japan in Spain and influencers who are trying to attract attention with glittering social networking sites. Why was he attracted to Japanese cyberpunk? We asked him why he was fascinated by Japanese cyberpunk and what he wants to express through his art career.

1.What inspired you to become an artist?

I love every art form, from writing to cinematography. I’ve done all kinds of artistic projects, but the one thing I always go back to is drawing. I started a degree in Media Studies when I was eighteen, but my obsession about drawing made me take a break two years later to start a Graphic Design course. That opened many possibilities, so I continued my Art Studies and I was hired by Ogilvy & Mather as a Graphic Designer. However, I wanted to be a full-time Illustrator, so I developed my portfolio during my free time and started sending it to all companies looking for an illustrator.

That’s how I finally got hired by McCann Erickson in Madrid, to work as an Illustrator 24/7. I worked there for six years in which I learned a lot about deadlines, advertising language  and working with very different clients. Advertising is a huge influence on my themes and style, but at that moment I felt I needed to take another step and become an artist on my own.

In 2016 I started in a Coworking space in Madrid’s Downtown, where I made my first personal projects. In 2017 I moved to Los Angeles, California, and I spent two years developing in-depth my own style and art themes, both digital and traditional; there, I became fascinated with Little Tokyo and the Japanese diaspora in America. The mix of Japanese and American aesthetic would since then be the core of my artistic inspiration. In 2019 I made my first exhibition, called Witchcraft, and I sold my first works during the 2020 pandemic. In October 2021 I will open my second exhibition, MACROBIANS II. 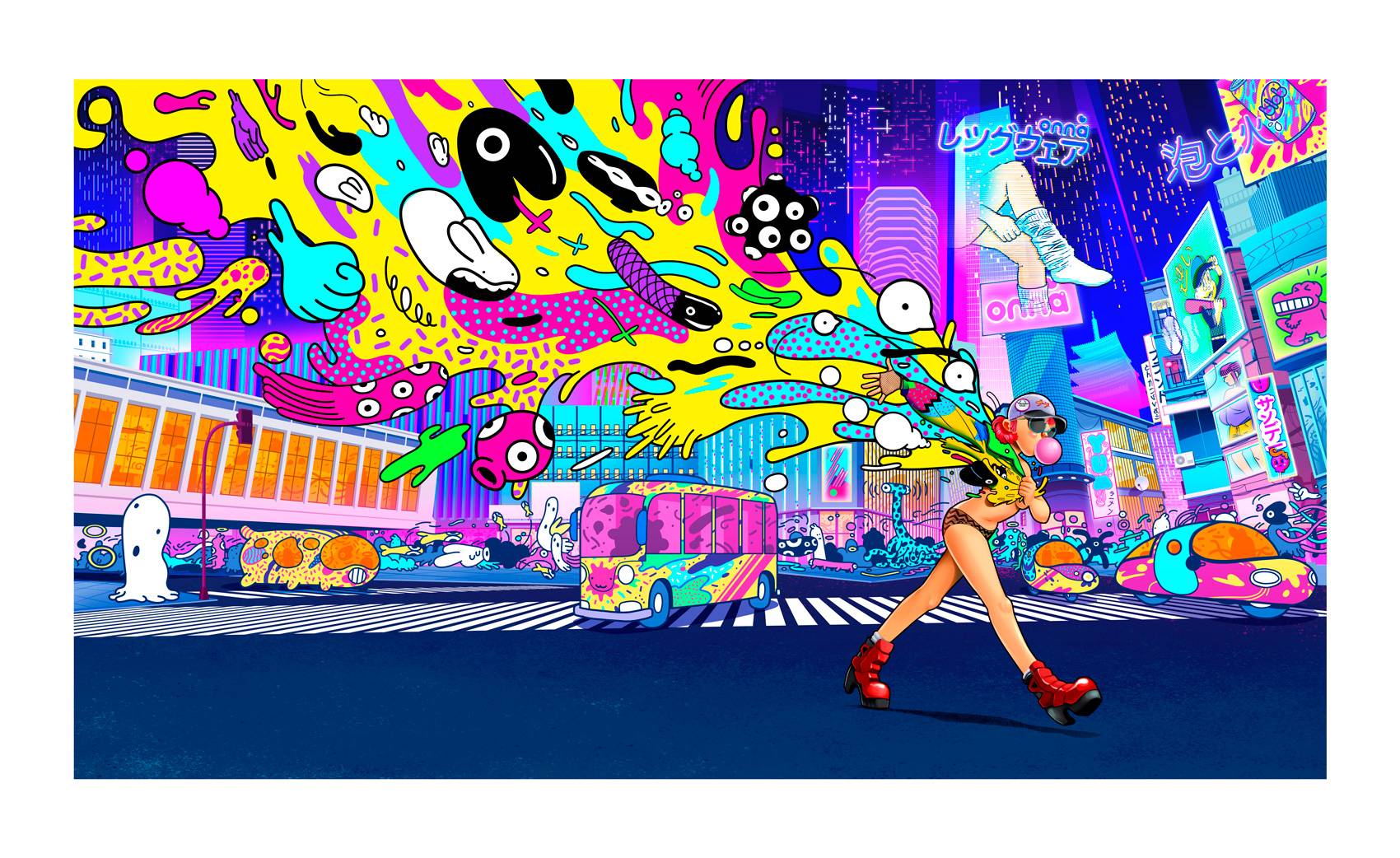 2.Your work seems to be inspired by Japanese cyberpunk. Do you have any experience in choosing this kind of theme?

I am an urban geek, fan of pop culture and big cities. I grew up watching TV, playing video games and reading manga and comic books, so my main cultural references came from other countries and different cultures, and this influence was so heavy that I started to draw japanese kanjis and read stories and legends from Japan.

I grew up in a working-class neighborhood where urban art and graffiti occupied every wall. At the same time, I had a strong influence of urban culture like punks and rockers, and everything in those movements allowed me to explore, they gave me freedom to create my own cultural world. Then I saw Akira by Katsuhiro Otomo, and it blew my mind. I started to read mangas like GUNNM by Yokito Kishiro and watch movies like Testsuo, by Shin’ya Tsukamoto, and cyber punk and japanese imagery became one of my main references.

Since then, neon lights and urban culture has become my obsession as an Artist.

3.What were your influences in developing your art style?

When I was developing my style, I started studying my own references, so I took my past works and all the references I used to establish a leitmotiv in my art. I realized that Japanese Artists were my main influence. Since the first drawing course I took, when I was fifteen, my main influences where artists like Akira Toriyama, Katsuhiro Otomo or Rumiko Takahashi, but over time I started to study the works of Takashi Murakami and Tadanori Yokoo and japanese magazines and advertising.

In 2011 I attended a Manga course by the mangaka Tsuyoshi Ogawa, sponsored by the Japan Foundation in Madrid. I delved into the use of manga tones and traditional drawing techniques that I’m still using today in many works, not just comic books. That course was very important to my career, since I got the chance to learn from the original source how to make drawings like the ones I enjoyed as a kid.

4.What is the most important theme for you?

Today I’m focused on capturing regular people’s lives influenced by social media and advertising. When I was in Los Angeles I met a few artists from different fields, and all of them were obsessed with their personal brands. That concept, Personal Brand, has haunted me since that moment in so many different ways. I’ve tried to develop my own personal brand and I’ve watched other people try to build their own, and the most important thing I’ve observed is that Personal Branding is an achievement not only for artists, but for everyone. I look at regular people and how they manage their relationships with clients, coworkers or even family and friends, and I see how everyone is trying to become a logo, a t-shirt of the year or a social media star.

That’s why my main theme is to capture people trying to get attention in an ocean of individualism through social media. All the women I represent in my works are real, and all of them have a considerable number of followers, and they spend a lot of time and energy trying to become a Major Brand influencer, though none of them is actually famous nor a Star. But I’m talking also about myself, as that social stalker reaching inspiration in social media and Advertising, not in Art Galleries, in order to create my own Personal Brand.

For me, being part of Tricera and being able to exhibit my art overseas is the culmination of my work. As an artist I try to talk about our times, when digital media allows us to see and share our thoughts no matter the distance. So it’s not only an opportunity to challenge other markets, but the goal I wanted to achieve with MACROBIANS II and the girls I captured. Rafa Mata is influenced by the fusion of East and West, mythology and modernity, as well as themes of social media, self-image and identity. His work is subtle, vibrant, sexy and uncanny at the same time. Overflowing with creatures, modern viruses and bacteria mixed with traditional gods, they spread across the urban landscape and surround the isolated woman.

Rafa Mata is a Spanish multimedia artist based in Madrid. She has worked as an advertising illustrator for ten years. She has worked for major advertising agencies such as McCann Erickson, Ogilvy & Mather, Shackleton, Havas I have worked for 10 years as an advertising illustrator for major agencies such as McCann Erickson, Ogilvy & Mather, Shackleton, and Havas. She has lived in Los Angeles, USA. I’ve worked with Hollywood screenwriters to bring their work to life. Currently, I am working on my first publishing project, my first exhibition, and my first exhibition in Asia. his first exhibition, and immersing himself in the development of his own art style, heavily influenced by Asian cultures and urban styles.

All of the works featured today are available at TRiCERA

Facebook
Twitter
Pinterest
WhatsApp
LINE
Email
前の記事Quick Insight Vol. 8 The Secrets of Choji Beniko, an Artist Who Depicts the Emotions of the Moment with the Delicacy of Japanese Painting
次の記事A work that shows us how to live with nature.

Soyhttps://www.tricera.net/
Editor in Chief / Artist Joined TRiCERA ART in 2021, Country manager of US Region. He was born in Melbourne,Australia and started his career with Film/TV Planner, Strategic planner at Advertisement Agency. Started work as a artist after joining TRiCERA under the name Soyblanc and joining his first exhibition in Tokyo in Dec, 2021.

QUICK INSIGHT Vol.13 The Coexistence of Pain and Beauty in Human Society portrayed by Norris Yim

Norris Yim paints abstract portraits that represent the complex inner lives of people living in the present day, and the pain and beauty of...
Read more
Interviews

The artist NAKAMITSUKI creates paintings using digital tools such as the iPad. This article will explore the aesthetics of the digital nature* era of...
Read more

Quick Insight Vol.4 Why is Hiroki Takeda the Artist of Choice in the Media?

Print sales by popular TRiCERA artists Pre-order here https://forms.gle/tugNmB9D1QEhPLSq5 TRiCERA is pleased to announce that we will be offering pre-order lottery sales of print...

Did you enjoy crafting with the paper as a kid? I certainly did! Folding, cutting, gluing, assembling, coloring, and drawing. The possibilities it had...

There are over 100 artists participating in the TRiCERA service, some of whom were featured in the Japanese TV show "Break Senya" called "The...

Toward the next era of conceptual art.

Kohei Kyomori is an artist who works primarily in two-dimensional art as a "modern decorator. His goal is to create powerful works that appeal...

Crossing the Boundary between Fine Art and Ceramics

There is no denying that the word "ceramics" has an old-fashioned sound to it.  If you are Japanese, you will inevitably be reminded of the...

Fuji and painting in a honeymoon relationship

Fuji, a World Heritage Site, rises between present-day Shizuoka and Yamanashi Prefectures.  Fuji, the tallest mountain in Japan, has been revered since ancient times as...

The Artist as Intermediary

Asami Asama, who works with embroidery techniques, describes herself as a "vessel." According to Asami Asama, it is important for her to stay...

Outsider art is a concept that was proposed by art critic Roger Cardinal in 1972. In other words, it is a technical term...

How can manga be distributed as art? Shueisha’s manga art “SHUEISHA MANGA-ART HERITAGE” has started.

Shueisha has launched "SHUEISHA MANGA-ART HERITAGE", a project to sell limited edition multiples of comics published by the company both in Japan and...

Adventures in Phenomena and Imagination.

An exhibition showing current trends in contemporary art in Japan.     From June 5 to 20, the 13th edition of Art Award Tokyo Marunouchi 2019, one...

Different gazes, each from a different distance.

Animals used to be nothing more than food and tools. Now, every day, humans are given the opportunity to heal them.  There is a Japanese...

What do you think of the summer landscape of 2020? Many of us have probably had to make some adjustments to the strange...

How is craft influencing contemporary painting?

Cat which travels through the world of painting, and how to preserve your feline cuteness forever in a work of art.

British artist Nicholas Hatfull’s first solo exhibition in Asia, “Thermals of the Mind,” will be held at THE CLUB.

In Search of Undefined Truth; Abstract Painting at Home – Part 1

What is art in the age of traveling to the stars?

Hiroki Takeda: Inhabiting the World of Animals in Vivid Watercolors

Why do we draw faces? On portraiture.

QUICK INSIGHT Vol.13 The Coexistence of Pain and Beauty in Human Society portrayed by Norris Yim

ishii-nobuo: A late blooming wonder, bringing smiles to the world.

Renewed Rain ~ The Most Familiar Way of the Unusual

Why You Should Buy Japanese Art” compared to other Asian art market statistics.

To be updated with all the latest news, offers and special announcements.

We at ART CLIP cover the latest art news from around the world and provide artists and We will continue to disseminate information that is more beneficial to the activities of the collector population.